We had a great opportunity to have a conversation with Lucky Walton, the 24-year-old designer of clothing line DXXDRICH (pronounced “dead rich). Coming from New York, he tells us that you are exposed to the fashion scene so much as a youth that it’s impossible to not be influenced by it. Recalling one shopping trip as a teen in high school where he came to a big realization, he has this to say:

“What made me get into fashion seriously was around my senior year in high school, when me and my friends went shopping we were looking around Macy’s – I remember asking the store clerk about a rose gold Michael Kors watch and why the price was what it was if it wasn’t real gold and he pretty much explained it was because of the name. 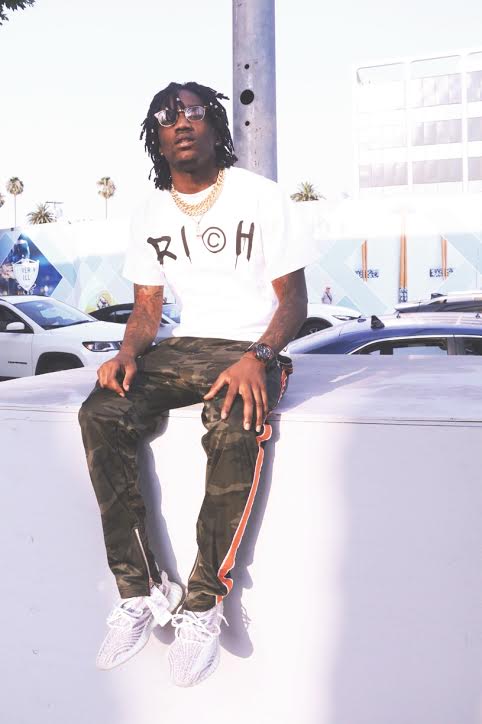 Throughout the rest of the day while I was shopping, I [realized] that all these expensive brands had no real meaning to them, really no brand did, it was just rich people telling us what was popular to wear and what wasn’t. They were just brand names and we were just giving them our money for their names so I decided that I wanted people to pay for not just a name but for something that actually means something and stood for something”

Inspired by real world situations injustices such as police brutality, gender inequality, racism, and injustice in the court system, along with many others, the brand DXXDRICH as a whole aims to be much more than just another brand.

Although inspired by other designers such as Tomoaki Nagao from A BATHING APE, James Jebbia of Supreme, Chris Brown of Black Pyramid, the brand encourages their designers to think outside of the box. Knowing that it is impossible to please everyone’s fashion tastes, they aim to:

“Stand out as a brand [with] the deep thought process we put into each piece of clothing we design, understanding that it’s more to fashion and designing then creating a logo printing on items and trying to get sales; fashion is about being creative and standing out all while being comfortable with who you are and what you stand for. That’s what makes our brand stand out from other brands, we give the consumer the ability to out their own meaning and twist to DXXDRICH.”

Emphasizing the importance of understanding the collective goals, both short-term and long-term, when running a business, his team will stop at nothing to accomplish theirs. Work ethic, dedication, and a thick skin are the keys that drive DXXDRICH and the life of Lucky Walton. Never allowing distractions to cloud his judgement or mind state, he told me that while his brand is growing, he has big plans for himself and the brand as a whole.

David: If you could work with any designer, who would it be?

Lucky: “If I could work with one big designer it would have to be Jeremy Scott I feel like with his creative mind and my creative mind we could come up with a very dope collaboration; I’ve always envisioned a pair of Jeremy Scott, DXXDRICH sneakers on my feet ever since I saw his Adidas bones sneakers in the Asap Rocky ‘Peso’ video.”

In an effort to not spoil any of his future endeavors, he was rather vague when I asked about was next for DXXDRICH. He was able to tell me a few things, however:

“We are working on getting some of your favorite artist and upcoming artist supporting us and wearing the brand, we are planning a lot more promotion trips, pop up shops, and giveaway contest so follow our social media pages and look out for the next big brand DXXDRICH.”

Leaving everyone with a message of positivity to end the interview he said to “always chase your dreams and goals no matter who believes in you or not and to never let the negativity from family, friends, and outside forces affect your dreams.”